How did the Spitfire Fairy come about? 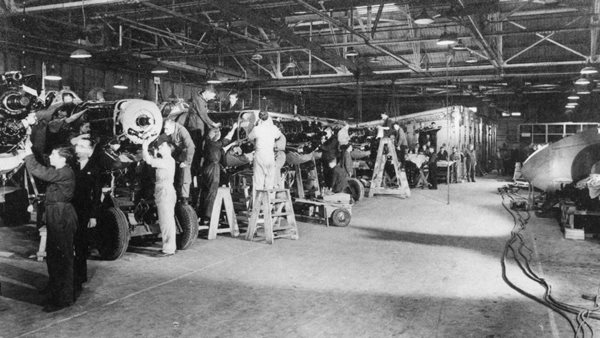 This incredible story started with the discovery of a 90 year old gentleman called Norman Parker. For many years, Norman had been giving various talks and writing articles on the manufacture of Spitfire aeroplanes in Salisbury during World War II. Having lived in Salisbury since the early 70’s, none of us had ever heard of any kind of significant activity during the war, let alone manufacturing aeroplanes. Hence we did some research to find out how the story started.

Numerous elderly residents who lived here during the war were consulted and the answer always came back the same – either they had never heard of such a thing or those that had were convinced that only few small workshops may have repaired small pieces of damaged wings.

In the meantime we had also contacted our film distributors who specialised in WWII documentaries and mentioned the story. They were convinced that this was simply “local folklore” as there were no more “new” stories to come out of WWII, and most stories have already been told many times over. They too had never heard of secret Spitfire factories but were excited at the prospect and prepared to keep an open mind until we came back with more facts.

Our first meeting with Norman was at the Amesbury History Museum where he works as a volunteer. The museum is an amazing place full of interesting relics from early settlements in the area, like something you’d find in a period movie.

Norman, a tall elegant grey haired gentleman, greeted us with a nice cup of tea and sat us at a small wooden table. When he started to tell us the story of the secret factories which were based in Salisbury, we suggested that he meant a few small workshops repairing wings? There was a pause as a knowing grin appeared on his face as he pushed forward an old worn dossier, opened it and pulled out some photographs taken at the time. These were pictures of young girls in dungarees and a few men putting together a Spitfire fuselage, whilst others were making wings and assembling complete aeroplanes! We asked where this factory was and the answer was short and swift in Norman’s usual fashion – “factories” he said, telling us about a the larger sites as well as a dozen smaller units and a couple of airfields which did the final assemblies… right in the centre of Salisbury and some just outside!

To us it was a fair assumption that in a small rural city with no trained engineers, surely only limited numbers could have been made? The grin came back with the answer, well over 2000 which was about 10% of total Spitfire manufacture. This was a master plan by Lord Beaverbrook and the war office to disperse the manufacture of Spitfires to secret unlikely locations after the main factories were bombed by the Germans.

For us this was the day our Spitfire “Fairy” came into being – all of us are now convinced that someone up there is looking after this untold, unknown story and clearing the path for us to tell this amazing tale. Almost immediately after the meeting, we discovered a spritely wonderful lady who was a young riveter at one of the factories which led us to another and then another. Before we knew it we were talking to ATA girls such as Mary Ellis and Joy Lofthouse who flew Spitfires from Salisbury, modern day RAF pilots who fly Spitfires as well as Typhoons, visiting factories that still make Spitfires today and recording Dame Vera Lynn reading a WWII poem.

The reaction from everyone involved has been incredibly moving and it seems there are people out there bursting for this story to be told, guided by our Spitfire Fairy… The story was ready, the Nemesis of the Luftwaffe was here and so the Secret Spitfires project was born.